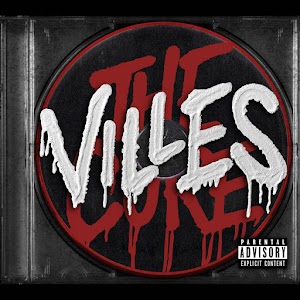 The second that I plugged in my headphones and started listening to Villes ‘Don’t You Worry’, I was immediately teleported to a music festival where I could just feel my blood pumping and heart beating hard and fast.   After touring and doing gigs all across South East Asia over the past six years, Villes has not only managed to build a robust portfolio, but also delivered a stellar performance inside the studio, with the same amount of confidence and passion they had while performing onstage.

Music is a universal language—it’s a cliché because it’s true.  However, that’s not necessarily the case for Singaporean post-hardcore band Villes, as most of the lyrics to the songs on their debut album, The Cure, are delivered through endless loops of cacophonic screams, making them a bit of a challenge to understand and listen to.

The first 20 seconds of the intro, ‘Bound’, shows exactly what the band is all about: heavy metal riffs with a touch of pop and electronica.   It starts off with a rhythmic and acoustic percussion groove, but then goes from 0 to 200 mi/hour in just the blink of an eye.

‘The Cure’ fully exposes the dark side of the fear-based society we all live in.  It’s almost as if the band is trying to unleash the beast in every single one of us, just so we could voice our own opinions and embark on a never-ending pursuit of truth. “Don’t let the noise of other’s opinions drown out your own inner voice,” as Steve Jobs sums it up perfectly.

The song “The Fear Generation: brings up existential and somewhat philosophical questions.  I couldn’t help but wonder whether recording it in a more stripped-down fashion would help the audience to resonate with the lyrics more easily.  Besides, with new arrangements, it could become just as hauntingly beautiful as Norwegian rock band Hihasakite’s acoustic version of ‘Samurai Swords’.

That being said, it’s worth mentioning that this song has the amazing rap beats from fellow Singaporean singer-songwriter and rapper Thelioncityboy .

Reminiscent of lead vocalist of Owl City’s electronic music, ‘The Other Side’ features an adequate amount of clear and pleasant vocals that’s like a breath of fresh air amidst all the overwhelming heavy metal loops.  Moreover, the alternation between raw, heart-wrenching screams and soothing vocals create a great contrast. To top it off, it also has a great batch of guitar riffs here and there.  There are a couple of bars in which the instrument sounds are clashing into each other, making it difficult for each of them to play a distinctive role in the arrangements.

What happens when two metalcore powerhouses decide to go for a joint project? Magic!  Featuring Ryo from Crystal Lake, ‘Step Down’ is the perfect fusion of the two bands, as they’ve both brought something different to the table.

‘Farewell’, is a departure from the never-ending waves of chaos and hysteria.   The mesmerising vocal delays and other sound effects create a dream-pop kind of ambiance, evoking a sense of nostalgia along with a hint of sadness and reluctance.  This song served as a buffer zone for me, as the instrument combos gradually wind down a bit, allowing me to pull myself back into reality.

To say that Villes’ The Cure has greatly expanded my definition of music would be an understatement.  It introduced me to the world of heavy metal, and the experience of listening to this genre of music could probably be best described as getting baptised in both ice and fire from beginning to end.
– Veronica Lin