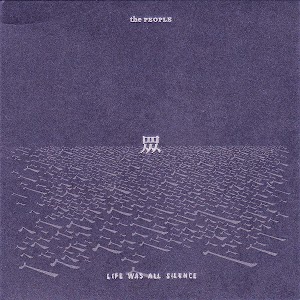 The band name, bleak album art and opening gambit–30 minutes of silence –“Nothing” suggest a band attraction to some sort of nihilism.  It is hard to know what to make of the album’s prelude: inside joke or black mirror reflection of the sound and fury of what is present day Hong Kong?  However, the music that follows is filled with evidence of life being more than silence; The People pulses with blood and heart, there is a sense of human urgency; the sonic colours, the light and shade all seem congruent with the peaks and valleys of living life as emotional beings.

The People is successful on a number of levels. Firstly, as an indie album—self produced and recorded in the band practice space—it is very sonically satisfying; Life Was All Silence has got their sounds down. “Two Ends” features some serious analog mojo modular synth madness; this ain’t no cheap date of digi plug ins. The genre announcing guitar riff on “Falling Wall” chimes and sparkles. Once the drums kick in, they sound big and open, well tuned and ambient. Through the course of the entire album, each well sculpted sound whether electronic, ambient or acoustic is captured with high fidelity. The mastering job by Anthony Yeung allows the album to breathe without squashing the sound through over compression. Secondly, The People features several strategically placed compositions, which provide the peaks against the equally well-placed valley of drones.  “Hide and Seek” is where the album takes the listener hostage with its hyped up drum n bass groove. The second movement goes into a 6/8 Jazz feel leading to the epic climax of the piece with its haunting and pleading synth melodies. “Fairy Tale” juxtaposes a marching snare pattern against a sparkly guitar leitmotif and a tape loop of a French kid saying something in French; this combo of ideas really work well together and make for a very specific musical statement. “Human Traffic” evokes the imagery of the daily grind of living in HK. It is not hard to imagine the lone subject (the listener) as it trudges against the human flood day in day out. “Human Traffic” is also symphonic in its construction with its three movements ending with an almost Wagnerian in scope string progression against some frantic yet jazzy touched drumming—this cat can play. The title track’s drone is so out on the parameter stoned immaculate that it is not surprising when what appears to be a tape loop of some NASA mission seeps into the mix. Like other drone tracks “Scarecrow is Waiting” and “I Couldn’t Regret,” “The People” somehow serves to make the listener susceptible to the statement that will follow. The album’s closer “Damascus” is a 1970’s prog rock lazer light show epic that brings together the bands many strengths; great playing, symphonic compositional construction, attention to sonic mastery and a kind of human pleading consistent from the dazzling first movement through the somber second leading to the climax of distorted power chord bass, orchestral drum scoring and mad scientist Moog synth sculpting. When it’s over, there is no doubt about when to clap.

I find this album to be very compelling and bold. It is the kind of album that demands to be listened to in its entirety.  In this day and age, where music seems to be so easy come and go, it is quite the accomplishment to make an album that is hard if not impossible to turn off.