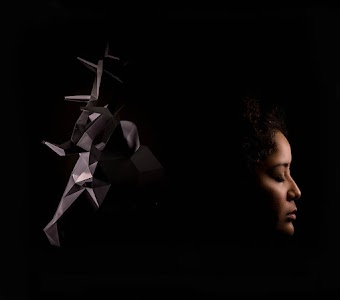 Described as trip-hop, but mining their own distinctive brand of techno-indie (if we must give what they do a label), Deer comprise Hong Kong-based Mexican duo Adriana Martinez and Miguel Bastida. The classically trained pair seem to have be around for some time, judging from their impressive touring portfolio taking in China, Japan, Taiwan, Korea, Malaysia, Vietnam, Russia, Estonia and Spain, and performing at leading music festivals including Clockenflap, V-Rox, Zandari Fest, Wake Up Festival and The Asian Invasion.

So why has it taken the talented couple so long to have produced what they describe as their debut EP, released earlier in March? Who knows? Honing their sound? Waiting for the right producer (Yuchain from Taiwanese band Green Eyes FYI)? Hiding out? (Deer are reclusive creatures, as it is well known).

Either way, it has been worth the wait. Portraits is a stunning EP, melding trip-rock, indie, synth, and even hints of jazz to produce hypnotic, emotive sounds gloriously encapsulated by Adriana’s soaring vocals.

Don’t get me wrong, it’s no picnic in Deer-world. There’s clearly a few issues here, reflected by the dystopian soundscape the pair conjures up, by turns urgent, dreamlike and chaotic. But in a good way, obviously.

And if the musical references are a little obvious at times, so what? We all learn from what went before, and the point is turning it into something that’s your own, while acknowledging your influences, which is exactly what Deer do here.

The band themselves say that Portraits is “a series of imaginary stories that emerge from our experience as Hong Kong residents. It embraces contrasting characters … a middle age man, a six-year-old kid. Each song represents one piece of a big puzzle: the face of what Hong Kong is to us. Life here is a drama of an ancestral life structure struggling with the western post modern crisis …”

Yes well whatever. For me it’s simply a big, explosive mix of great tunes, brilliantly written, arranged, performed and recorded. Politics be damned.

Wild Eyes
This is just great. Kicking off with Killer-esque guitars, it lulls listeners into a false sense of security, before launching into a massive and compelling chorus that insists you get on your feet and throw yourself around with wild abandon (which was a bit embarrassing as I was on the MTR at the time). Its huge and hypnotic outro will change your life (not necessarily for the better, but your choice – you could have gone to church instead, right?).

Alive
So cinematic, so romantic, I hear hints of Republica’s Ready to Go, even some Joy Division in there somewhere. Do I feel alive? Yes, thanks to you, Deer.

In the Shadows
Strident, with Adriana at her most imperious, querulous Grace Jones sensual. Divine, delicious. Demonstrates a real maturity and vision. Again with the musical cinematography, especially towards the end.

I Want It All
Almost Afro/Indian exotic vibe in places, I also hear a suggestion of The Prodigy’s Firestarter musically, but otherwise it’s simply a trippy, emotive paean to a lust for life. Angsty yet approachable, I love it. And at the end of the day, isn’t that all that music is about? Yes it is. (Just trying to save you a bit of thinking time there, readers).

Far from being shy and retiring, Deer are up-front, in your face, here to change your musical life. And I, for one, am grateful. And will never eat venison again. Promise.
– Dan Creffield