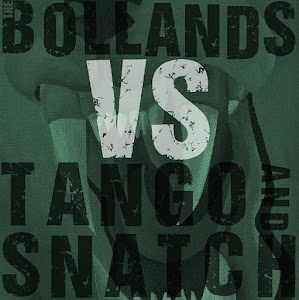 Hong Kong record label Artefracture, an independent company that caters to those looking for too-cool-for-the-mainstream music acts, has once again released an album that theoretically shouldn’t work but really does. The Bollands vs. Tango & Snatch is the answer to the question that you’ve never had; what would happen if a rock band and an indie folk three piece came together and covered each other’s songs? The four track album includes one cover and one new original song from each band.

The Bollands are a folk act originally from New Zealand. They try to break away from the stereotype of soft vocals and acoustic guitar by adding a lot more energy in their performances. They describe their music as ‘foot-stomping folk’. Tango & Snatch, on the other hand, are a rock n’ roll band originally from Cambodia with some unexpected riffs that sound like they belong in a country song. Tango & Snatch seem to have perfected the art of having certain lyrics that are repeated throughout the song that are begging to have an audience chant them back to the band.

This fusion of indie folk and straight up garage rock works a lot better than it should, mainly thanks to lucky selection of the perfect bands to pull it off. The raw rhythm and energy starts with Tango & Snatch’s cover of The Bollands and The Bollands are (not surprisingly) able to keep the ball rolling and punch back with their lively two tracks off the album. The 4 songs work well together cohesively to create some kind of hybrid genre that sounds like it belongs. The folksy blues melodies strangely mirror the grimy guitar riffs favoured by Tango & Snatch.

One track that particularly struck as a stroke of musical genius was the first track, The Broken Scene. Before listening to the Tango & Snatch cover, I listened to the original by The Bollands and I was immediately hit with a fear. A fear that the cover would be just another one where a band thought that making a ‘punk cover’ of an acoustic song consisted of cranking the distortion of a guitar up and screaming the lyrics. However, when the first few chords rang through on The Broken Scene (Tango & Snatch version) my fears were immediately assuaged. The bluesy elements are really brought out by the gritty voice of the lead singer that actually manages to keep the sweet gentle meaning of the lyrics. However, Jasmine Robertson’s vocals were rather lacklustre but were saved by pairing with lead singer’s vocals.

As for The Bollands cover of Tango & Snatch, after having a laugh at hearing the sweet merry voice of Joyce Bolland singing “I’ll see your punk ass in hell”, one really can’t help their foot tapping along to the lively rhythm of the cover. Chris Bolland starts the song off with a captivating acoustic riff that should have the sound of waterfalls and the view of mountains accompanying it, Of Monsters and Men-esque. As The Bollands really get into it, elements of Irish folk start coming out and the phrase ‘foot-stomping folk’ is really understood.

In the end, The Bollands and Tango & Snatch bring out the best of each other and amplify it in their own distinct way. In addition to this, the two original tracks on the album are strong affirmations that not only are the two bands superb at venturing into other genres but they excel at what they do and it’s no surprise that they absolutely smashed the challenge of merging two styles effortlessly and flawlessly.
– Max Ferguson

Get the album here: https://artefracture.bandcamp.com/album/the-bollands-vs-tango-snatch