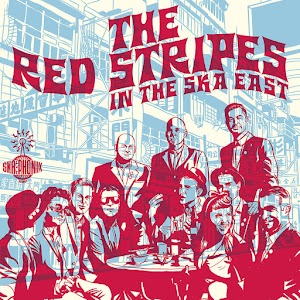 The Red Stripes have been around as long as anyone can remember, having played at the Wanch for a number of years. But their real break has only been during the last five years, when they began touring around Asia in Singapore, Tokyo and right here in Hong Kong at Clockenflap 2014 (They’ll in fact be at Clockenflap again this weekend). After releasing two of their singles Ok-la and Jamie Vardie to international online appeal, they began to record In the Ska East, their first fully mastered album. Already being a local favourite, having the Red Stripes now on record is sure to make many people very happy.

However, outside of Hong Kong, the album will undoubtedly serve as a first taster for many listeners worldwide. With only ten short tracks, the album is one heck of a first taste; although barely hitting half an hour and yet leaves a lasting impression of infective rhythms, upbeat melodies and a general sense of undeniable, unshakeable fun. Diversity is not the album’s strength, quality is. All the tracks are well written, well performed and well mixed Ska tracks. Easy listening, easy to sing along to and easy to dance to. The songs themselves have hints of Beatle-esque lyric writing drawing to mind specifically ‘Magical Mystery Tour’, there’s also a hint of Motown in some of the tracks which makes sense as many members of the band hail from Britain with a few from Canada and Australia. Although all the tracks are straightforward fast and upbeat Ska, they still have some variety; from the dark, sexy Lemme tell ya to the fast love song Julia Posh and even a cover of the infamous Theme from Rocky.

The highlight of the album is Ok-la, one of the singles that gave them the international support to record an album. Although not many of their songs mention Hong Kong explicitly (and sounds even less like it comes from Hong Kong), this song is named after the very Hongkongese dismissive Cantonese statement ‘ok la’. The song’s fun melody and funny lyrics like ‘No income tax, no VAT, no money back, no guarantee’ encompass exactly what the phrase means and the ways it can be used. Is it an extra friendly ok that you love like ‘no income tax’ or is it a whatever-style dismissive to shut you up like ‘no money back, no guarantee’? Two of the songs on the album specifically mention the band’s home city Hong Kong in the title but none come close to actually speaking about Hong Kong – Ok La does that – and it is this song that justifies their self-proclaimed title of ‘Hong Kong’s premier ska band’.

The Red Stripes will be performing at Clockenflap on Saturday the 18th playing songs exclusively from The Ska East with the official album release to come soon after. Come try them out before buying the album, I promise you won’t be disappointed!
– Cyril Ma

The album will be available from 9th December 2017 onwards at The Red Stripes own website as well as various other places on the Internet.