Victor Wooten is an American bass player and composer and a recipient of 5 Grammy Awards. He started learning bass when he was two. He has 4 elder brothers, all of whom are also musicians. Everyday after school they would practise their instruments. He started performing with his brothers in their family band—The Wooten Brothers Band when he was only six years old. Victor joined the group Bela Fleck and the Flecktones as a bassist in 1988, which brought him recognition for his bass skills. He then released his own albums and created a workshop – Groove Workshop aiming to teach others bass. In 2000, Victor created a bass/nature camp — Victor Wooten’s Center For Music and Nature, which taught a unique combination of music and nature studies to students from all around the world based on Victor’s 40+ years of experience. Recognizing the connection between the two, Victor experimented and eventually developed an approach that could be shared with others to immediately help understand and play better music, as well as (and more importantly) improve all aspects of one’s life. Victor is one of the most respected musicians in the world.
We interviewed Victor ahead of his debut gig in Hong Kong.

Hong Kong welcomes you! You have a lot of fans here in Asia. How do you feel about visiting Hong Kong for the first time?  香港歡迎你！據我地所知你喺亞洲有好多支持者，咁你對於今次首度探訪香港有咩感受呢？

VW: I’m really excited to come to Hong Kong. It’s a place I’ve always wanted to visit. To be invited to perform here is a dream come true.
VW：我好興奮可以黎到香港。呢到係我一直都想參觀嘅地方。重可以喺呢度表演真係夢想成真。
———–

Do you find more enthusiasm among fans in Asia as opposed to the west?
香港嘅支持者對比起西方嘅支持者會唔會更熱情呢？

VW: The listeners in Asia are awesome! They are definitely attentive and more polite. I can tell from the stage that they are totally getting it. Because I don’t visit Asia as often as other places, the audiences really make us feel welcomed.
VW：香港嘅聽眾真係冇得頂丫！佢地絕對係更細心同有禮。當我喺台上面我睇得出佢地十分享受。因為我唔係經常有機會探訪亞洲城市，D聽眾真係令我賓至如歸嘅感覺。
———–

What are some of your favorite things you do to pass the time when you are not performing, during your tours overseas?  Sightseeing for example?
當你喺外地唔需要表演嘅時候，你會有咩節目呢？會唔會周圍去參觀下呢？

VW: I like to meet people when I travel. I do like to sightsee, but I prefer to do it with new friends who live in the area.  Because everything is new to me, everything is worth seeing.  I also like walking around looking at whatever is around me. I love nature, local music, and meeting interesting people. It’s easy to find things to do in new places.
VW：當我旅遊嘅時候我好喜歡認識新朋友，因為我覺得有當地嘅朋友做導演會重開心。對我黎講去到一個新城市咩都好新奇，咩都值得睇。我亦都鐘意一路行一路留意我身邊嘅事物。大自然，本地音樂同有趣嘅人都令我感興趣。其實去到一個新地方好容易就會搵到野做。
———–

Are you a fan of foreign cuisine? Hong Kong has some great food!  咁對於外國食物你有冇興趣呢？香港係美食天堂黎㗎喎！ 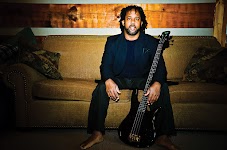 What basses did you bring with you with this tour? Can you tell us about them?
你今次表演帶左咩低音吉他黎呢?可以同我地分享一下嗎？

You’re a family man, a father of four. How does having your own family affect your songwriting and creative spark?   你家庭觀咁重，又有四個小孩子。你嘅家庭又有冇對於你創作音樂有重大影響呢?

VW: having a family makes an already wonderful life even more special. There’s never a dull moment, which gives me many
things to write about. The love totally translates into my music.
Plus, my kids are all good musicians and singers. I can get ideas and inspiration from them.

You come from a very musical family! How is it that you chose to play the bass as opposed to say, the guitar or the drums?  真係一個音樂世家！點解當初你會選擇玩低音吉他呢？

VW: I’m the youngest of the five Wooten brothers. When I was born, my brothers already knew they needed a bass player.  That became me right away. So, they chose the bass for me. I was very lucky.
VW： 我係五兄弟入面最細嗰個。我出世嘅時候，我一班哥哥已經知道需要一個低音吉他手。好幸運地就決定咗啦！
———–

We understand you had a birthday this month! Happy belated birthday wishes! How did you celebrate? Did you do anything special?
我地知道你啱啱過咗生日喎，生日快樂！你有冇特別慶祝丫？

VW: Thank you. My birthday, September 11, is always a special day. This year I spent it relaxing with my family. The following day we went to a fun place called Escape Nashville where they put you all in a room and give you one hour (and a few clues) to find you way out. It was so much fun.
VW：多謝！我生日9月11日係一個好特別嘅日子。今年我好輕鬆咁同屋企人度過。之後個日我地去左一個叫Escape Nashville 嘅地方好似逃出香港咁。好好玩！
———–

VW: After taking my first class in Nature Studies back in 1991, I realized that that class was a good model for teaching music. Also, a good friend of mine was already hosting Fiddle (Violin) camps in Nashville, Tennessee . Those two programs, along with my strong desire to share, helped solidly my own ideas for how I wanted to run a program. I held my first camp in the year 2000.
VW：1991年當我上完第一堂自然科學後，我發現呢個課程好適教育音樂。而且我朋友已經喺田納西州納什維爾舉辦緊Fiddle（小提琴）訓練營。呢兩個因素加埋我嘅強烈推薦，係主要幫我建立我嘅課程，而喺2000年成功舉辦第一屆。

You are an inspiration to musicians all over the world! What would you say to someone who is just picking up a musical instrument for the first time, and wants to learn?
你真係各地音樂家嘅好表表者！你有咩想對一個音樂初哥講呢？

VW: I would like to tell everyone that you are already musical. You just need to learn how to express your musicality in a new way – through an instrument. No matter how much you learn, don’t forget what you already know. And, remember to have fun. Sharing your fun with others will make it even more fun.
我想對大家講：你地本身已經有音樂細胞喺身體入面！你只係要運用一個新渠道去演繹 －樂器。無論再學幾多都唔好忘記自己本身既知識。重有要記得去玩，享受。同其他人一齊分享重有更多樂趣添！
———–

Do you have any plans to go back in the studio any time this year? We’d love to hear more of your solo work.
你有冇打算返去錄音室呢？我地都好期待你嘅新作品。

Your first solo album "A Show Of Hands" was absolutely mind blowing! Years and years later a lot of bassists are still trying to figure out what you were doing on that album! Did you expect that your bass playing would have such a huge influence on the world of music, way back then?
你第一隻個人專輯“A Show Of Hands”真係令我聽出耳油！時隔咁多年有好低音吉他手都重諗緊你當時係點彈！你有冇諗過自己既音樂會對大家咁有影響力呢？

VW: Although I knew that I was doing something different, I definitely wasn’t thinking about the effect it would have on the world. I was focused on getting my ideas out and recorded in a way that made me happy. Sometimes, getting your ideas out of your head and heart can be difficult.   I hadn’t heard a solo recording done that way before so I didn’t have a model to rely on. I was really happy that I was able to make a record I was proud of, and I hoped a few other people would like it.
The fact that it has inspired people around the world is an amazing bonus.
VW：雖然我知道當時我既玩法另類D，不過冇諗到會有咁大回響。我好專注咁張我自己既思維灌錄係碟入面。有時都幾難兩全期美，不過我未聽過有類似既玩法所以都冇一個好好既樣板。我好開心個成品係值得我去驕傲，亦都希望有幾個人會欣賞。
冇諗過會有咁大影響力。
———–
You have some amazing concepts about music as a language and a pathway for spiritual growth. How did these ideas develop and how has it affected you as a musician and a person?
你對於音樂成為語言一部分，加強思維成長既概念係㸃樣發展呢？又對你作為一個音樂家或者平時有咩影響呢？

VW: These ideas came about because of how I learned to play Music. I was really young when I started playing with my brothers. I was learning to speak Music at the same time and in the same way I was learning to speak English.
As I grew and became a teacher, I realized how special I had been treated by my brothers and my parents. I also realized that all children are treated that way when learning their first language, but not when learning music.  Realizing that we are comfortable talking about all aspects of our lives, I wanted to help others become just as comfortable speaking with music. Treating music as a language still seems to be the best way to do it. This way of thinking has made me a better musician and, more importantly, a better person.

You’ve laid down some of the most amazing bass tracks on many records. Your playing just comes to life, whether it’s a groove or a solo. There’s an unmistakable feeling of joy and excitement on your bass lines. How do you convey such emotion in the things you play?
你參與過好多專輯嘅錄音，你既音樂帶俾整體一個生命力，而喺你既音樂入面又聽得出愉快又興奮嘅感覺。你係點様去表達出呢D情緒㗎呢？

VW: Again, thank you. The same way you can hear the joy in someone’s voice who is excited about life. You should be able to also hear it in their music. Because of how I think (or don’t think), it allows me to use music like a language and express myself clearly.
再一次多謝你。其實同你聽一把人嘅聲一樣，你應該都聽到玩緊樂器既人既感情。因為我既思維空間令我可以透過音樂就好似語言咁同聆聽者分享。
———–
Thanks a lot!!
真係好多謝你接受我地訪問 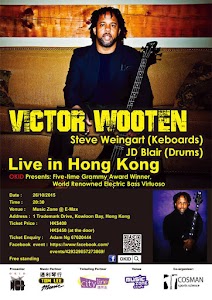 Victor will be performing for the first time in Hong Kong on 26th October 2015 at E-Max.  Grab your tickets now!
Victor將會喺2015年10月26號首度喺香港E-Max公開演出. 快D去買飛啦!