In today’s interview, we feature Light Years, an American pop-punk band formed in 2009, consisting of four members: vocalist/guitarist Pat Kennedy, bassist Tommy Englert, guitarist Andrew Foerst and drummer Kent Sliney. Recently signed by Rude Records, the four-piece is currently on the edge of completing their highly-anticipated second full-length album after the flaring success and buzz of their debut album “I Won’t Hold It Against You” and a five-song EP “Temporary”. Their music mostly focuses on the way to deal with problems in their mid-20s, as well as to heal the scars incurred while coming of age.  Thanks to Pat Kennedy, the frontman of Light Years for talking to us. 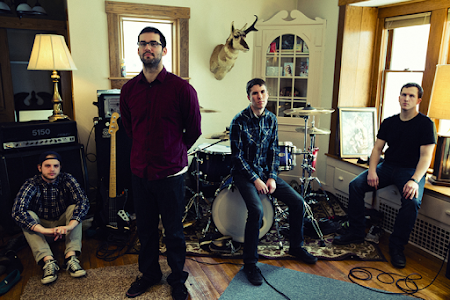 1. How did you meet each other and come to form a band?
Tommy (bass) and I (Pat, guitar, vocals) went to high school together and bonded over our mutual love for Blink 182. We had a band in high school that sucked and then later met Andrew (guitar) and Kent (drums) when we were attempting to go to college. And the rest is history as they say.

2. Can you tell us the first time a stranger recognized you as part of the band and how did you feel about it?
One time at my job working at a pizza place a kid came in and said "hey i know who you are."  It was funny and sad because all I could say was "yeah…that’ll be $13.45." Being a celebrity is hard sometimes.

4. You’ve recently signed with Rude Records. What made you guys choose to sign with them?
Rude records approached us and wanted to help with our next release, and everyone seemed cool and easy to work with. They also will be releasing it worldwide so hopefully we can reach some new places.

5. Your second album comes out this fall. What are the main themes and ideas behind the new album?

The new record deals is mostly about coming to terms with the choices we have made that led us to where we are today.  A lot of songs deal with trying to cope with the fact that we are getting older than most of our peers, and that people my age are not usually making no money, with no health insurance, with no family, or plans to settle down at all.

6. What made you want to pursue music as a career?
I remember when I first started playing guitar when I was about 12 I never wanted to put it down. I learned how to play a power chord, and knew that was all I wanted to do for the rest of my life.

7. If you could combine with any band and make a supergroup which band would it be and what would you be called?
Combine all the "years" bands – The Wonder Light Four Years Strong.

8. Is there any meaning behind the name of the band?
Nope. It just came to me one day, and everyone liked it!

9. What do you do to relieve stress while the band is on tour?
I don’t know if kids will read this so I’m not gonna comment on this.

10. What has been the biggest challenge during the whole process of making the new album?
The biggest challenge with making the new album for us was juggling our time between the band and trying to work our day jobs. It’s hard to leave town and record for a month and then leave for a month long tour right after that. But we made it work and I think the sacrifices will pay off.

11. Does anyone have any secret talents?
Tommy our bass player has his pilots license and flies planes.

12. If you could have a superpower, what would it be and what would be your superhero name?
My superpower would be making every nasty toilet in a venue super clean and comfy with a snap of my fingers. I would be called Mr. Clean.

13. Who in the band is most likely to call their mum everyday?
Andrew, huge momma’s boy.

14. If you had to swap instruments in the band, what would you pick?
I would pick the drums. They look like the most fun and I am an amazing air drummer. But I’m actually awful when I sit behind a kit for real.

15. Are there any rules in the band?
There is no crying in Light Years.