El Jay spoke to Dave Vanian to ask him some questions prior to their second Hong Kong performance.

You last performed in Hong Kong in 2012. What was your memory of that gig?

It was a strange gig, put on by a friend of a friend. He asked whether we’d play Hong Kong if he paid for it, so we said yes, of course. But it wasn’t actually a proper music venue of any kind – it was a pizza house with a PA [Grappa’s Cellar]. There was a great atmosphere, it was full of expats. There just weren’t enough locals! Glad to hear it’s a proper venue this time.

What are you most looking forward to about performing in Hong Kong again?

It’s just nice to play in front of people who’ve never seen you before. [Playing abroad] is like getting a whole new start somewhere. We won’t have much time, but we’ll try to cram in as much culture as possible. We’ve done Japan a few times, and we’ve seen it change a lot over the years. When we first went there, everyone was really polite and no one would react until you finished playing, which is when they’d clap. Now they’re screaming teenagers. China is just an uncharted country, I’m surprised more bands don’t play there.

Hong Kong is a thing unto itself and has been for a long time, but I can’t see us doing an extensive tour of China ever. I don’t think any of our songs would make it [past censorship]! I’d give it a try if someone was willing to set it up, so maybe we’ll venture there in the future. 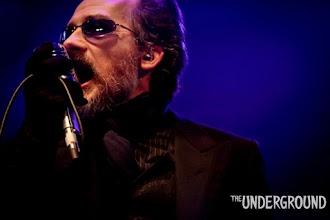 Get Chris B on the case. We hear she has contacts… Well is there anywhere else you’re looking forward to playing this year?

Funnily enough, it’s places we haven’t been to for a while. We haven’t been to Australia or New Zealand for a few years. Australia is so cut off from everywhere else that you forget it had an amazing music scene in the 60s and 70s. A lot of Australian bands are never heard of outside their country. I’m still discovering lots of late-60s garage bands from there. The first time we went there, we were playing with a band called the Jonnys, who were really wild bunch with great songs. And we’re looking forward to America – it’s like going home for us, in a weird way. America – the west coast in particular – was the first place we got completely accepted. In England, you had to fight your way up to prove yourself, whereas in America they embraced us completely and got what we were doing. It was right at the start of a whole music scene there as well. When we go back, we get a wild audience – people know us, we have a lot of friends there. I’m hoping to go to other places as well – there’s talk of us going to Russia at some point, which I wanted to do years ago when it was a communist country, just to see it for how it really was. We had a gig booked but the promoter ran off with the money. Our manager got a visit from the KGB and we never ended up going to Russia.

You’re being supported by young punks The Pansies. They’ve got all of the same swagger and spirit. Pretty sure it’s made their lives to be supporting you.

The Pansies?! [laughs] What a great name! Brilliant. Whippersnappers, eh? Oh my god, we better watch out, hadn’t we?

Do you have any words of advice or cautionary tales from them embarking upon great careers in punk?

They need to stick to what they think is the right thing for them, and not get messed around by people trying to force you to do something that doesn’t fit with the band. It can be a fight sometimes, because managerial types, or people who are just after money, will try to make you go in other directions artistically. It takes a lot of guts and tenacity to stay true to your path, because sometimes there can be money involved. We found out the bitter way a few times, with bad management and record company problems in the past. Other bands might have collapsed completely, but it just made us stronger each time.

The business around the music has changed so much, so there are different ways of doing everything now. In lots of ways it’s easier, and there’s more music out there, and you can record easier. The difficult part is getting paid, because everyone downloads it for free. That’s fantastic in one way, but not good if you’re trying to pay the rent. At the end of the day, it is a job as well as a great thing to do. But great, I can’t wait to meet The Pansies. With a name like that, I’m expecting great things.

Congratulations on the band’s 40th anniversary! How are you celebrating?

Well, everybody else is. I’m kind of done with it now.

It’s been absolutely marvellous, it’s going to fund our next album. It feels better this way, as it’s funded by the audience who are going to come and see us, rather than some record exec. In a way, it’s come full circle as a DIY punk way of doing things.

As some artists get older, they get very middle-of-the-road in their music. People like Iggy Pop never did though; he’s always stayed brilliant. We’re no Rolling Stones, that’s for sure. Our fans have kept us alive over the years through the hard times when we didn’t have record companies behind us. We were always able to go out and do really extensive tours, because people wanted to see us. We’re a good live band and that’s what’s sustained us over the years. When you see a Damned show, you always get an interesting show. You’re not watching people going through the motions. There’s still a bit of professional commitment there, believe it or not! 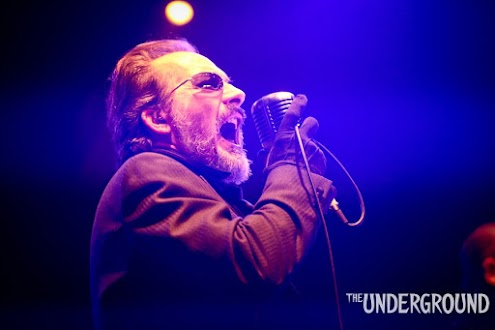 Is there anything you can tell us about the new record?

It’s in its raw state at the moment. We’re demoing songs and getting ideas together. It’s just a big melting pot of ideas that’s coming together right now. It’ll be a surprise in some ways, but people who know us won’t be [surprised], as they know every album is different. This one is possibly going to go back to our psychedelic days. A bit more garage band-y and wig-out. It’s going to be interesting.

Where do you look to for songwriting inspiration these days?

Just the same as it always was, really. It can come from something that’s been on my mind for years, or it can come from a relationship or something I’ve been through, or a newspaper headline. You never know when it’ll strike.

Do you find time to write while you’re on the road?

No, I’ve never written on the road. Maybe a few lyrics, but never music. It’s too difficult; there’s too much going on all the time. It’s gotta be midnight, with a full moon … [chuckles].

After all these years, what keeps you excited about going onstage?

I don’t do anything in particular, but what helps is that we get on. A lot of bands who have been together for a while don’t actually like each other every much. There are loads of great bands who I know, and I wonder why they bother going on stage. We actually enjoy each other’s company. I’ve lost count of how many times I’ve played these songs, but I honestly don’t get bored of them. I’ve played ‘New Rose’ millions of times now, and I don’t get bored of it. I think Captain [Sensible, guitarist] might get a little bit bored of that song, but I don’t.

Another thing about this band is that we don’t choreograph: we don’t say the same thing or do the same things, and we often play tunes differently, or will throw something in that we don’t know. That keeps it fresh for us, and then that keeps the audience on their toes too. We’ve been playing our first album in its entirety, which we hadn’t done for years. It’s not like we’ve been doing the same set for 10 years, like Guns n’ Roses or something.

Do the same songs get the same reception these days as they did back in the 80s? or have different tracks become popular over the years?

It changes. It happens with every band that’s been around for a while – the eras in which different fans have grown up are most important to them. The oldest punks – the first album is the one they really want to hear, because it might take them back to when they first kissed their girlfriend, or whatever. Then you’ve got the Phantasmagoria era with ‘Eloise’ and songs like that, which other people want to hear. Sometimes in the past, we’ll have written a song and people haven’t liked it at first, but then it becomes the most requested song. When ‘Eloise’ came out, I think it was considered a pop song – in the bad sense – and now it’s the one fans all jump around to and want to hear. It’s the same with songs like ‘Curtain Call’ – we were known for three-minute songs but suddenly wrote an 18-minute epic tune that goes through different moods. It’s now something people love and want to hear – it got such a great reception at the Royal Albert Hall. Our songs take you on a journey: there’s music to get crazy to before you go out, then ‘Curtain Call’ is what you put on to chill out when you get back at the end of the night. That’s what music’s for, it hits you on an emotional level. We could have kept doing the same things, but we’d have been a one-trick pony. Would you ever re-record songs from your debut, or do you think that would make them lose their charm?

We’ve been asked that, but it’s difficult because I wouldn’t do anything differently, and we’d never be able to recreate the way it was. So a re-creation would be wrong, but I wouldn’t mind doing a different version of it as a bit of fun – like, I dunno, a ukulele orchestra or something! A lot of bands think they can go back and do it better somehow, but the beauty of our album is in its rawness and the way it captured our personality at the time. It’s perfect.

I wouldn’t be against recording a live version, as live is a different animal completely. Even an orchestra version, or a lounge version might work! You gotta remember that the first album was with Brian James [former guitarist], and it’s his best work. If it was the old line-up in a live setting that might be cool, but I wouldn’t want to do it in the studio.

You probably don’t like to think about it in terms of decades and milestones, but do you have anything you’d like to accomplish before, say, your 50th anniversary?

Well, I actually got close once – I did a song on a swing album. There’s a famous song by Bing Crosby and Bob Hope called ‘Did You Ever’. I did a version of that for a swing band called Lee Press-On and the Nails. I was Bing Crosby, I might add.