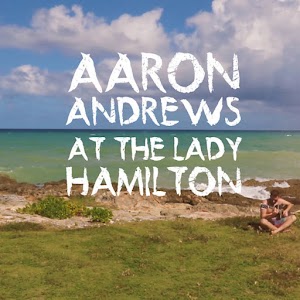 At the Lady Hamilton is the latest full length album from Canadian singer-songwriter Aaron Andrews, who has been in different bands such as Scratch Nasty and worked in Hong Kong for awhile. Andrews’ new album, which includes seven new songs and five covers, was recorded live in Jamaica with only Andrews, his voice and an acoustic guitar. If you like this style of reggae-infused, acoustic guitar, I highly recommend you take a listen to the album.

At the Lady Hamilton starts out very strong with “Number Nine,” which is very relaxed and clean. The song sets the tone for the rest of the album. This strong streak continues with the next couple of songs. “Gambling Man” especially stands out: Referencing Hank Williams’ “Ramblin’ Man,” the song takes a very melancholic approach compared to the rest of the album. While most of the album is calming with perhaps hints of sadness, “Gambling Man” slows down to tell a story about making choices, which is also the subject of  Williams’ “Ramblin Man.” However while Williams says he is always moving on and never settling down, Andrews sings about how by making choices he is shutting out other opportunities but ultimately will find his destiny. The song really is a genuinely sad exploration of the idea of choice.  It is also one of the more instrumentally interesting songs on the album with a mixture of strumming and picking.

In the next part of the album, we get two more new songs as well as one cover in “Dandy Dan” (a song Andrews’ also performs with his band Scratch Nasty) which all are very well done. Although it is a very short song (only 52 seconds, half of which is white noise), “We’re Going To The Movies” hits me hard with its beautiful and genuine sadness. I also really love the bluesy riffing that begins “How We Roll.”

If there is one major issue I have with the album it comes in the second half with the covers. As individual songs, each . However I feel they do not add to the original songs much. Specifically “Gimme Some Love” doesn’t feel complete unless you’ve heard the Scratch Nasty original and, at least for me, it doesn’t match the swagger and rocking sway of that version. This may simply be a result of a transfer of genre but I feel the extra instumentation and electric style of the original puts it above the cover.

“Get Gone” is probably the best of the covers as it is the most transformative. The cover feels like a truly different song and, I would argue, the laid back strum musical style fits better with the lyrics than the more electric musical style of Scratch Nasty’s version. The rawness of the vocals breaks up the flow and provides a welcome contrast to the cleanness of the vocals in the rest of the album.

The album ends on a very strong note with “These Days.” The song is an original by Andrews first recorded for his previous album, Wave Electric City. The song takes one last stab at melancholy by adressing the persona of the singer-songwriter. By changing around the verses from the original, Andrews gives the song a much more powerful ending – and by taking out the background vocals and the snap-based percussion, he makes the song fit much better with the album as a whole. It’s a beautiful song to conclude a genuinely beautiful album.

Though Andrews isn’t changing anything drastically from his previous works or the genre as a whole, he has written an album of amazingly fun and heart-breakingly sad music.

Get the album here.