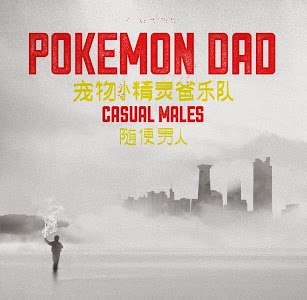 I’ve believed in sexy geeks since way before they became fashionable. Nowadays, it’s essential to look beyond appearances when deciding if someone has what it takes. But I’m beginning to conclude that pretty much anyone who can pull off math-rock (or math-whatever) is an automatic qualifier. Pokemon Dad have certain elements at first glance – the anime reference is a bit obvious; the nod to Rick Moranis and Ghostbusters less so – but it’s the Escheresque song structures and smörgåsbord of time signatures that quickly convince.

There’s also a great deal of stylistic variety on “Casual Males” with comparable tracks spaced out, unsurprisingly, in equidistant manner. Uncle Paul’s Theme is reverb-heavy space indie that could be compared to Modest Mouse, while Slad is heavier shoegaze-type indie you might hear from Arcade Fire. Life Pan Sears Most Grandfathers and It’s Time to Fade Away recall 90s electro-rockers Gerling, while the whirling jazz-funk weirdness of Aphasia more or less defies comparison. There’s even some (almost) poppy material: Merwe, It Was I and Out of Doors which is a 6/8 closer built to be the last track.

It’s tough to do math-rock without occasionally sounding gratuitous, and Aphasia for one stumbles in that particular pothole. But Uncle Paul and Merwe are gloriously cubist, the latter also sporting a winning bass riff to complement the generally excellent drumming and strong dual vocals. Overall, Pokemon Dad display a nice mix of precision and rawness: polished enough, but the sound and the human performance both remain authentic, which seems like a deliberate choice. If this is what the Shenzhen music scene is getting up to, it could be time to check the visa and head up for a look.