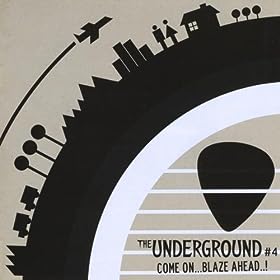 8. Living in the Face of Danger – Sushi Robot

2. Papercut in Your Eyes – Dark Himaya

5. Hanging Around the Clouds – Brothers of Roadkill

6. Questions and Doubt – Brothers of Roadkill

Wondering how to get your own copy of Underground CD #4?

– From the Wanch, and HMV, and CD Warehouse stores

We don’t have a “review”, per se, of CD#4 yet, but we do have a special feature right here on the Underground website, by Isobel S. Saunders!! Here’s an excerpt:

The fourth CD in the series of Underground Hong Kong CD compilations features 11 bands of diverse music genres and creative sensibilities. The CD reflects Hong Kong itself, a locale that is culturally-diverse and constantly changing. This is the music born out of different experiences of Chinese cultures and international cultures, artists all making music their own way in a city that has many faces and perspectives. It is an intriguing collection of indie recordings that, not only brings eclectic viewpoints to the fore, but also a spectrum of quality musicianship offering alternative rock, breakbeat electronica, subterranean pop, acoustic folk-rock, jazz funk, blues rock and post-punk rock fusions. It is a special document, as all the other CD collections in the series have been, and one that captures a small piece of the Underground live music vibrancy that bands and music fans have long celebrated at every gig. This is alternative Hong Kong at its best – unadulterated, free and authentic. …

Read the rest of the feature, which includes the bands talking about their songs, right here!!

The CD was launched in the form of two launch parties on the 6th and 7th of May 2011, and the featured bands’ performances were split between the two gigs.

Here are some comments about the release parties from the bands:

Having the opportunity to be in The Underground CD is one of the coolest things an indie band in Hong Kong can end up doing and every Underground event is always special in its own way. Underground HK is a great motivator for us artists and we are thankful that there is such an event here in Hong Kong. Thank you Chris B and to your crew who always put up a good show!

Playing at the launch party was a great experience, not only for the bands invited but also for the audience who were quite vocal in their support for the music but also for the sponsors and organizers. The venue was a great choice and every band had something different to offer. We’re very happy to share the album with so much unique and home-grown talent.

– A chance to play the first indie gig at the new Hard Rock Cafe – check!

– Our song blasting out of the Hard Rock speakers – check!

You can’t ask for much more…

It was a great night – the only problem we had was getting off stage to let the House band play!