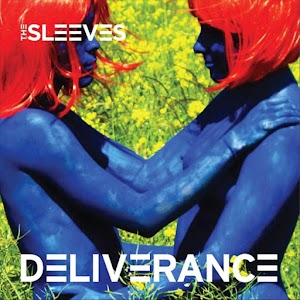 The Sleeves newest album Deliverance just released last weekend is an adventure through 60s to modern British rock. It’s a great album: strong, exciting and very British. Though I did prefer their last album ‘Arcade Rock’ (you can read our previous review of that here); Deliverance does not disappoint.
If you are new to the band, The Sleeves are a Hong Kong formed British rock band, proud of their background most of their posters have either/or both the Union Jack and a rickshaw. Their music follows a general Brit-rock formula: raw but heavily produced, poetic but not abstract, theatrical but not melodramatic. Deliverance shows a shift from the more psychedelic writings in Arcade Rock in favour of a heavier, dirtier classic rock sound.

The band’s strengths lie in their infectious melodies and great performance. Listening to the album but one or twice will undoubtedly give you an earworm for several hours. Although I don’t think it’s on purpose, the band’s writing lends itself to this with almost every track having an extended refrain where they sing the same phrase over and over till it gets stuck in your head. The earworms are neo-80sBritpop (for lack of a better actual term), short and simple they’re both easy to sing and easy to stick.

I specifically mentioned ‘adventure’ and ‘theatrical’ earlier in the review because despite a shift to a rawer sound, many songs feel like a tiny theatre production within itself. The Menace (Pt. I & II) for example starts with a slow classical instrumental that doesn’t, as you’d might expect from similar introductions, lead straight into the song by way of distortion and a heavy drum entrance. Instead, it continues and varies for over a full minute, then ending blurring into a lone sine wave, the song only gives us its theme a whole one and a half minutes in. But the entrance isn’t without use, the contrast of a slow, classical introduction with the much heavier but similarly dark main song helps establish a much more sombre atmosphere.

Old Jag, one of my favourite tracks and most persistent earworms is quite theatrical as well. Working in thirds, it starts with an aggressive introduction about presumably, the old jag, “cruising the streets in [their] old jaguar, soft leather seats and a half-smoked cigar”, not the most exciting life and a bit of a creep, but around a third of the way in, the song does a 180 shift becoming upbeat and lively, almost mocking the previous section and introducing the earworm “now you’re living in Brighton, you spend you days at the penny arcade”. The final third might be my favourite part of the album because layered over the earworm are seaside town sound effects (well, we are in Brighton). The effects, strangely familiar, I think are ripped straight from Yellow Submarine, and even if they aren’t, they surely give a 60s psych pop vibe.

Though most of the album is great, I think the weakest link is not in the writing of the songs but the lyrics. The music is great, there’s no argument about it, but the lyrics are often cliché or too simple. The Horror, has a chorus that goes “kill it kill it, kill it kill it, kill it kill it, kill it kill it”. The Menace has “The sun goes down on a norther town as we sit and watch the bodies burn, shake our heads at the dead and quick and the dead and the one’s who’ll never return”. It’s not that these lyrics are bad and there is benefit to simple lyrics (like being easy to remember and sing along to – those earworms have got to be fed somehow), but I feel like one or two of the songs could be more poetic. The songs, all being quite complex with multiple sections, could keep me writing for weeks but it’s much better to just go listen to it.

In short Deliverance is a strong second album from The Sleeves. A return (or shift, however you want to look at it) to classic rock but inspired by British pop from the 60s all the way to the modern day. You’ve got dark emotional numbers, you’ve got lively, upbeat tracks and plenty of great solos to go around. Despite a few small flaws, the album is none the less easy to listen to, varied and fun.
Reviewed by Cyril Ma