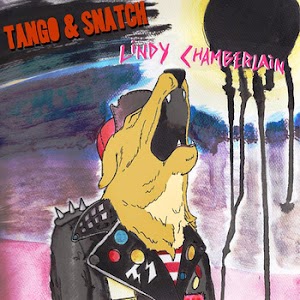 This offering from scenesters Tango & Snatch, like the band itself, is punchy and economical. Comprising seven tracks of two-minute wonders, it’s a fair representation of the band’s manifesto and the madness familiar to anyone who’s seen them play live.

“The Haunted” starts things off in typical style. Big Daddy ‘Joey Jones’ Hastings lays down a jaunty, rockabilly-style beat with deftness and precision, while Ziad ‘Tango Pants’ Samman provides the cowboy drawl and snarling, garage-quality guitar and Jasmine ‘Popcorn Shrimp’ Robertson hangs out on the root note and emits delicate ooh-oohs in the chorus. “Dingo Ate My Baby” ties in with the album title, referencing Lindy Chamberlain who was imprisoned for murdering her daughter Azaria and later exonerated. Aptly enough, this number conjures up Nick Cave on amphetamines, the dark and frenetic storytelling punctuated with punkish ‘hey hey hey!’s.

“When She Comes” harks back to other dressers-in-black, a heavy debt being owed to Motorhead’s “Ace of Spades” in the verse, while the amped up folk melodies in the chorus call to mind a satanic version of Love Me. While retaining the same tonal qualities as the rest of the record, “Howlin’ At The Moon” is punkier and poppier and would really come to life with a more mobile bassline. The band’s lack of interest in more than one sound becomes a bigger problem on “Oh Baby Baby” where Jasmine’s voice – which would be great for alt-pop-punk – takes the lead but struggles to bend itself to Ziad’s style. The well starts to run a little dry with “Cocaine Train” which begins promisingly but ends up as a statement without a song.

The closer, “Naked And Afraid”, breaks the mold. Singers take turns to belt out bouncy, melodic verses with a sense of fun and whimsy that will inevitably make this track a fan favourite. It provides an uplifting finish to an album which is, for all its unevenness, curiously samey but good value nonetheless.