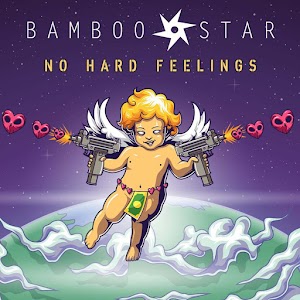 You may all remember about a year ago, following their Kickstarter campaign, Bamboo Star were building up to leave our reclaimed shores for America to work with famed LA based record producer Bob Marlette. I for one thought, judging by his name, perhaps he was some kind of reggae producer. But no. He’s the real deal, having worked with bona fide rock gods like Black Sabbath, Alice Cooper, Rob Zombie and one of my favourite bands, Seether. After hearing this, I felt Wolf and the guys were in safe hands.

Bob completely captures Bamboo Star’s high intensity sound and even manages to bring their live energy into our headphones. “No Hard Feelings” follows up 2016’s “Broken Hearts and Bleeding Parts”, this is an EP poised to take the band to the next level.

On opening track It’s Just Business, I’m immediately reminded of the bass playing goddess that is Jasmine Wong. Last year at the Underground’s Heavy Unplugged gig I was mesmerised by her funky bass lines and here their intertwinement with the band’s rock roots brings a serious layer of uniqueness and star quality to their sound. It’s the lead single from the album and it’s punchy as hell, hitting you right between the ears. With its political undertones, it’s had some US radio airplay and is bound to be a crowd favourite.

Movie Star is a new classic of theirs and to those around HK who know it, will enjoy hearing it with such quality production. The slowed down bridge with the lyric “what he does or doesn’t do, does not concern you”, gives the song the break it needs from that infectious chorus. The outro mash-up with the song’s signature “woah, woahs” brings it home just the way it needs to be. This track is made for the arena. The sooner you learn it by heart, the sooner you can scream it out with your hands in the air.

The mood takes a late 1980s Bon Jovi turn with Wait For You. One of their strengths is in how swiftly and effortlessly they move away from the comfort of rock to a ballad type aesthetic. Cue acoustic guitars and a sweet nod to California here, the birthplace of this record.

Take Another Swing is a fine rock opera song for me. I can see one of Broadways baddies presenting himself to the audience with this tune, sort of Scar-esque from Lion King. “You have your chains, I have my choice.”

Closing track Ivory Tower is an awesome nepotistic political lament which really showcases the whole band. Jasmine delivers another super-fine bass solo and Terence Ng’s trademark glam rock guitar makes the song what it is. However, I’d love to hear a slowed down version of this song. It feels like its powerful message is lost at times with its quick time signature.

Last stop on this rock wonder ride is a canto version of Ivory Tower which I have to say I prefer to the English version. The sonic intensity of the track really suits Cantonese and the bilingual nature of the song adds another layer of interest and complexity to the narrative for me.