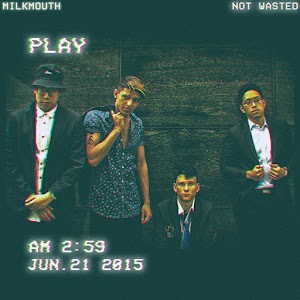 MilkMouth’s ‘Not Wasted’ isn’t groundbreaking in an aesthetic sense and that’s 100% ok because it doesn’t try to be. Instead it offers a glimpse into a lifestyle and a mindset that I think is starting to become rare in the Hong Kong music scene. I appreciate that this band wears it’s influences proudly and I think this was a release where you could hear a certain honesty that only comes with genuine confidence.

‘Not Wasted’ features back and forth vocals between co-lead singers Adam Sinclair and Zaine Dada. The Sinclair/Dada songwriting team show’s they can handle the usual pop-punk and emo topics easily, albeit at times resorting to somewhat safe lyrics “just do the thing, that you do best, lure me in to your wickedness, steal my oxygen again”. There are instances where the lyrical content of the songs start to reveal the narrator looking forward, not just living in the moment and describing sensations. “GOD, you see, i have this urge, who knows where i’ll be in twenty years, a monk, maybe a hermit? not making this purpose is my fear, a monk, maybe a hermit, GOD, GOD, GOD, GOD, you see, i have this urge.” Sinclair shifts between murmuring and screaming as he discusses the possibility of his dreams slipping away from him. The vocal delivery at the end of ‘Urges’ is ugly and animalistic. It’s what Hong Kong music needs right now and was definitely one of the highlights of the EP in my opinion. In contrast the clean, crystal, guitar intro to ‘You & Your Craving’s’ refreshes the listener like an icy cold shower. I’m glad Milkmouth chose to mix things up often and kept introducing new little bits of ear-candy throughout the EP.

There was a sense of detachment that seeped through (especially noticeable in the vocal delivery) that I think will start to wear in future releases. Zaine and Adam sometimes sound as though they don’t want us to know they care about these songs they’re singing, fortunately an occasional whimper or sigh would betray them and remind the listener that this was a real band with real stories. If Milkmouth can take the introspection a step further, really push their boundaries (and challenge their audience’s expectations) they’re without a doubt going to create some really beautiful, really colourful records that will reach out and touch their listeners. The ‘Not Wasted’ EP showcases a variety of different sounds and definitely keeps it’s audience focused utilising catchy melodies contrasted against abrasive instrumentation. Regardless of whether you’re into old-school American emo/melodic hardcore (think Mineral, Sunny Day Real Estate) or more modern pop-punk and grunge (Green Day’s Dookie or Nevermind-era Nirvana) you’re going to find songs on this record that will satisfy you.
-Zubin Isaac

Not Wasted can be streamed on all major services (Spotify, Apple Music etc.).