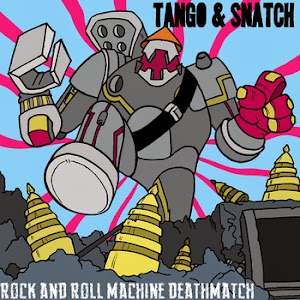 Tango & Snatch formed in 2012 in an Irish bar in the Cambodian capital. For the first 11 months the band played fairly regularly at the notorious Sharky Bar. "The crowds were generally quite hostile (with a few exceptions) as we were not playing cover songs from the 60’s and 70’s, and we seemed to be ‘missing’ a bass player. We were getting paid in tacos and beer." – Ziad, the band’s guitar player. Well fear no more, because they began playing in our own city, Hong Kong, and even recorded an album – Hong Kong is generally a lot more accepting with underground music and tunes. So, In November 2012 they came to Hong Kong and recorded ‘Rock & Roll Machine DEATHMATCH’. According to Tango & Snatch, they believed the name was a fair reflection of just how difficult it was to play original music in Phnom Penh scene at that particular time.

Indeed, ‘Rock & Roll Machine DEATHMATCH’ runs through cycles of ebb and flow, but thankfully with the flow outweighing the ebb. Many of the band’s signature styles are well-infused into each song, as Rock n’ Roll meets rockabilly/country/blues hasn’t sounded this great and concise since the 1960s. Many of their songs boast fuzzed-up leads and scratchy/growling vocals. There’s no denying the vitality of songs like "Phnom Penh City Girls" (Track 7), "Outlaw Hearts" (Track 2) or "Billy & Bobbi" (Track 3) because of their overall pure fun attitude although it is easy to nitpick at each track because of their need to keep up the running motif/concept.

Track’s 1, 4, and 5, all have a similarity within their name – ‘Baby’, yet their musical styles and techniques within them are quite different. ‘Oh, Baby Baby!’ (Track 1), ‘Rockabilly Baby’ (Track 4), and ‘Baby #1’ (Track 5) are in complete rockabilly, while softer, spoken female vocals contrast with the harsher male vocals, the fast-paced melodies are full of articulated furious contempt – a rare notion in music. We still have diversion from the general rockabilly genre though, ‘The Outrageous PFB’ (Track 9) is a slower, more bluesy piece, while we also have ‘Boom Boom’ (Track 6), a rock-oriented piece with powerful riffs, and lastly, ‘Slam Dancing/Drinking Song’ (Track 8), swollen with old-timey allusions.

It’s hard to believe Joe, Jasmine and Ziad were initially paid with tacos and beer for their music. From what I’ve listened to, T&S have a really distinct musical persona, and their music has a lot of personality to it as well. Each track is like a little short story with a great fullness to it, Rock & Roll Machine DEATHMATCH is for if you want to go a little crazy for a couple o’ minutes!
– Chloe Cheng