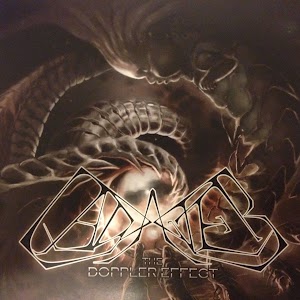 This is Cadaver’s 8th year in the Hong Kong heavy metal music scene and also my first time hearing something as heavy as this ‘sung’ (or growled) in the Chinese language. They are a melodic death metal band who play undulating rhythms and condemn moral and ethical hindrances in modern society. Cadaver present a more bass heavy style of melodic death metal, with bass guitar-heavy rhythms. The Doppler Effect displays a very obvious characteristic – ferocious, aggressive overtones that are accompanied by an aggressive instrumental.
Elemental Retrieval (Track 4) uses plenty of fast double-bass drum patterns and certain elements from black and thrash metal. The fast harmonic guitar lines provide a solid platform, alternating between powerful chords and simple licks of melody – it helps to secure a tighter and more focused vibe that complements the rough growls.
The Doppler Effect (Track 2) picks up the pace, and speeds up the metal too. Short, frantic phrases come out low and guttural in an eerie mood while the drums are banged at a constant. Speed picking descending guitar riffs bring in some thrash metal/new wave heavy metal elements to the track.
Where we get some kind of color and shape on the forged wall of noise: Backlit Manipulation (Track 6) conclusively leads into a couple of clean shredding guitar fills in between the harshness, while there is tremolo picking and fast paced shouting in Moments of Massacre (Track 5), and plenty of reverb and feedback in Breaking Pupa (Track 1).
However to criticize The Doppler Effect, the socially-charged lyrical themes seem to be weak against the titles of the tracks, which appear to be over-complicated, and the lyrics seem to be delivered with less sincerity. Even their title track The Doppler Effect, doesn’t seem to hold something truly exceptional, which is inevitably their biggest downfall. The cyclical and monotonous pattern that runs deep through Cadaver’s album is quite disappointing – melodic death metal has big opportunities to vary and surprise, and that’s what I’d be looking to the band for next.
– Chloe Cheng