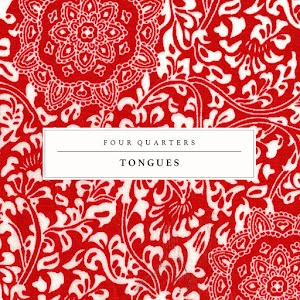 Lathered in a fuzz tone only found on analog recordings of Cherubs or Lighting Bolt, the drums pick through the background, poking holes in the now gurgling melody the guitar starts to build as the track begins. Re-cut scenes from Chungking Express are used for the music video, with the song passing along the same message as Wong Kar-Wai’s film highlighting the isolation and loneliness found in a modern day metropolis. “Connect your brain to your tongue and your tongue to a body/ Hands on her hips, chewing on your lips again,” come through clear as Zubin sings the lyrics in a slurred out, and nasally drone with the bass coming in straight and crisp, taking the foreground on the track from the fuzzbox and keeping tempo tied down. A warbling chorus tone from a guitar greets the next bar after a short pause, added another growing layer to the canvas of the song, vaguely creating this atmosphere the song wants to build but hasn’t quite finished. It marches into the bridge with the words “Maybe you could help me out/ I was thinking you could help me out” keeping cadence in line, as a short pause greets the listener. Then, the chorus flies in, bringing with it an airy and light sounding tone foaming away from the instruments, as well as to the vocals. Scenes of two main characters in the film wrestling as the song play in the background, eventually driving home the theme being sung over this scene of hopeless affection that only leads to despair, finally clearing the haze around the song as it reaches that focus and mood it was clawing for earlier. The guitar and the vocals reach that slightly blown out, breathy post-punk sound, only really hinted again by the scenes cut together thus far, but now coming and taking the forefront from the guitar. The second verse is brought into focus, with more samples and snippets from Chinese opera cracking and shaking over the music. A little refrain before the chorus begins again with the same two characters on scene, this time a synth can be heard sounding much like harmonica, capping off the high end and adding a well-done solo to tie the chorus up. The feeling of the song here hits full swing here with the words “And then she starts to say, that you’re getting in the way of, Things she needs to do”. This comes off incredibly well during the scene being shown to the viewer, highlighting one of the more important characteristic of the song, its atmosphere. The song concludes with a jet taking off from the neon giant of Hong Kong’s skyline, climbing from Kai Tak as the band slowly fades out.

It’s a step out for Four Quarters in a lot of ways, and one in which the band sounds comfortable with and capable of pulling off. It’s a track made for the purpose of sticking you in a melancholy frame of mind and holding you there, with the music video cementing that feeling for the duration of the song. This fact cannot be overstated because it seems as though the track was made with that purpose in mind, and judging by the previous output of the band this wouldn’t be out of character. Chungking Express was a perfect choice for that mood Four Quarters wanted to convey, adding to the song immensely and not coming off as inauthentic or overly stylistic. Recutting an already established movie like Chungking Express, a movie that still to this day holds cultural relevance both in the art and music scenes of Hong Kong and else where in the world, was a risky move, but it didn’t disappoint me as it seemed to fit the song. The track will more than likely surprise you if you’re familiar with Four Quarters, but in a way that doesn’t seem forced or amateur. It’s one that fits and sticks with me and makes it one of the better songs I’ve heard come out of Hong Kong in awhile.

You can listen to the track here or watch the video.