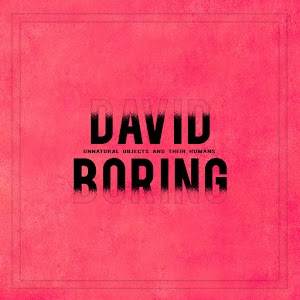 No one watching David Boring’s searing set at The Underground Summer Festival last year could forget the palpable gloom that descended upon the room and held the crowd rapt. Now, the Hong Kong rock five-piece has released their full-length debut, Unnatural Objects and Their Humans.

The group goes to great lengths to appear unbothered and self-deprecating, but it’s clear that a lot of love and care has gone into their album (recorded and mixed by Jay Tse, from Life Was All Silence). The recording captures the cathartic hopelessness and detachment of the band’s anarchic disposition and, at times, nihilistic subject matter. But this cynical malaise is shot through with a crackling, impatient energy and a stubborn non-conformism inspired by 80s British and American punk.

From the provocative song titles and confrontational lyrics, to the dual, jagged, saw-like guitars and piercing vocals, the album recreates the studied aloofness of the band’s live show. But this isn’t just a bunch of art schoolers playing around with effects pedals: it’s a corybantic call to arms that takes shots at society, the government, and the apathy and detachedness of humanity as a whole.

Lead singer Laujan prowls the record as fiercely as on stage, from where she glowers down upon the crowd. “This is not about being wild or breaking free or searching for redemption for humanity,” begins opener Chapter 0, a spoken-word manifesto over industrial machine sounds and squally feedback. As Stan Chik’s drums build to almost drown out the words, the final, damning utterance arrives: “This is not a healthy world.”

Born out of the turmoil of Occupy Central in 2014, Smog begins with a ringing guitar drone reminiscent of Lou Reed’s ostrich tuning, as heard on Venus in Furs, embodying the “slow decay” and “toxic environment” the band describes on their Bandcamp page. The disquiet explodes into discordant, jarring rhythms and anguished wails – a “controlled insanity”, as David Boring puts it.

Machine#1, one of the band’s most well-aired live tracks, features the refrain “Nothing ever happens and it was boring,” uttered in mocking, atonal calls over angular pecks of guitar and phaser-pedal swoops. Sishuo Liu’s simple, punchy bassline becomes central to the track, instilling paranoia as she plays around with pitch.

At eight minutes long, Men is an impressive centerpiece. It takes its time to build, layering cold industrial effects and gradually ratcheting up the tension to ominous levels. At around the halfway mark, huge, apocalyptic cymbals break through, before the noise is suddenly pared back again to a single, distorted bass riff. Laujan arrives, cursing “a rotten shell of human” over unsettling guitar effects as the chaos builds once more. The macabre stylings and frantic shrieks over careering, haywire guitars conjures early Horrors, while the layered noises amount to the kind of cataclysm Swans would be proud of.

The band applies its bristling nihilism to Machine#2, creating a mood that’s rather relatable. “I know the world’s about to end … but why’s it taking so long?” Laujan asks, simultaneously resigned to mourning a broken society, while raring to revel in the ensuing chaos. Guitarist Yat Wa Cheng’s incessant, grating melodies are dragged along by a stomping, almost militaristic rhythm, building to a climactic wall of sound.

Laujan’s voice, an Estuary British drawl that ratchets up to fevered chant then deafening shriek, recalls the spoken word, loud-quiet stylings of Prolapse, Hole and Slint, mixed with the shrill insouciance of Poly Styrene. On Loosefuck, her rapidfire incantation harks to the proto-punk of Iggy and the Stooges and Black Flag, as if the song were a misanthropic spell tossed into a cauldron of grunting bass.

“Looking like a flower, falling out the tower!” she shouts over tightly-wound guitar distortion and rattling engine bass on Susie Exciting, a treatise on mental illness. By Suicide Pop, Laujan’s screams have reached an asylum intensity. Alone, she is that friend who calls you up during a gig to scream down the phone over the music. When she and guitarist Jason Cheung become locked in a to-and-fro, it sounds like listening to a neighbour’s argument through the walls.

One of the more arresting acts to have emerged from the city in recent years, David Boring have released a brave and stirring debut that, while wearing its influences on its sleeve, may see the young quintet soon mentioned in the same breath as their heroes in record shops across the city.
– El Jay