In Japanese literature, there’s an old folktale regarding a book so terrifying, it’s said that all who hear it die of fright. Despite the honest friendliness of the band, Cow Head (the books namesake), likely had a similar impact on the other bands that night. I had heard them live once before, and the combined musicianship of each of the talented four-piece was used to create a fantastic and formidable wall of sound. As the opening act and with the addition of a violinist since last I saw them, I was doubly worried for the hearts of those that were due to follow.

The band’s ineffable stage presence could be felt even before they kicked-off. They carried themselves like the cool cats of jazz without the air of untouchable, the demeanor one perceives of those who know their stuff from inside-out.

The bands virtuosity immediately filled the room in the form of a shifting sonic-landscape, seamlessly tying together the Spanish-flamenco styled guitars that no doubt recalls Rodrigo y Gabriela, but blended with a strain of bossa-nova on crack-cocaine. A texture so thick, it couldn’t be cut with a butter knife was combined with a relentless rhythm. The audience bobbed their heads agreeably, and the floor vibrated faintly with toe-tapping to ‘NMT‘. (I’ve been told that NMT stands for No Musical Talent, don’t believe them!)

By the second song, it was evident that the band wasn’t in the slightest control of the music. Rather, the music was controlling them. A fantastic testament to the passion that Hong Kong bands hold in creating original music, a lovingly crafted set that let the music take over on stage for all of us. ‘Maze‘ saw the violin to good use, it’s legato phrasing complimenting the rapid, mandolin-esque playing of Simon on electric guitar. Had the band been any more in-sync at this point, they might’ve been fit to join a military marching band.

At this point, it must be noted of Ryan’s confident style of playing. Combined with his power-stance and beaming show-man’s grin throughout, it earned him every right to bagging the title of best-guitarist at the end of the night!

Black Pepper saw a fantastic fusion of bass-fills with an elaborate air of classical. Cow Head regularly collaborates with local artists, most recently folk group ‘Sea Island & Ferry’, which perhaps leads to the remarkable open-mindedness of their music. Cow Head have a knack for being able impress an audience, without ever seeming to mean to. This came out especially as the band swept through tempo changes flawlessly, an awesome display of musical talent that comes naturally, not as a means of egotistical showboating.

A tight set that transcended the boundaries of genre, and a shame that the band was only able to win one award that night!
– Ryan Harling

Look up “cool” in the dictionary and you’ll find a picture of Dusty Bottle. Music, image, vibe, these are the coolest kids in town. Vocalist Miss Cherry cuts a chic figure in her white dress and shades, and sings with effortless, languid passion. Nice. Musically they are somewhere between jazz and soul, a slick, professional, dance sound that just makes you want to move.

Aptly titled first track, “The Beginning” set the tone with a great groove, and Miss Cherry putting out a very 80’s Sade-esque groove. At times almost soundtrack-like, it was a very atmospheric way to kick things off.

The next two tracks “Baby Don’ You Know” and “You Don’t Know Me” are stronger melodically, with elements of Nora Jones and Renee Olstead, and the vocals slowly building in intensity.

Overall this was a cool, slick, entertaining performance. It’s a pretty well mined musical genre, however, and limited to just three songs, Dusty Bottle’s set seemed to end before the band quite got the chance to really demonstrate their own distinctive personality. Was there enough originality for the judges? We’ll see …
– Dan Creffield

Esimorp came to stage as the most standard outfit so far that night, following a funk-jazz band that featured groovy usage of a talk box, and a five-piece that cleverly eluded the confines of genre. I hadn’t seen them perform live yet, but if they were able to pull off what I’d seen them capable of doing on their Ted-x performance on Youtube, the alt-rockers were due to put on a show that would wow the audience and judges.

Esimorp opened strongly with their best-known original, Apostasy. Unfazed by the high-standard set by the previous bands, lead-singer Promise (I realise only now that Esimorp is his name backwards, doh!) belted out evocative vocals turned all the way up to eleven. What a shame however, that the rawness and emotional-intensity of his voice was exploited at the sacrifice of the ability to distinguish the lyrics, which when heard are indeed quite clever and a cut-above most mainstream alt-rock bands. Non the less, the band was able to demonstrate their musical ability, bright and melodic guitar-work from Ric acted as a brilliant polyphonic framework for the uplifting tone that carried the song.

By the second song, Nothing More, the audiences’ heads could be seen bobbing in their sea of pop and rhythm. The intro came to with an engaging use of call and response between Ric and Promise’s guitars. A nifty bit of drum work came through here and there, but for the most part Julian contributed by providing a strong backbone throughout the set. Promise’s vocals, a meeting of Dave Grohl and Caleb Followill from Kings Of Leon, was met half-heartedly with backing from bassist Paul. For such an energetic performance from the rest of the crew, I feel that he would do well with a couple of cans of Red Bull before a performance to keep up with the rest of the band.

Posted on the bands Facebook page that night, was the offering of the debut new original for the show. Promise built up the hype with his lively stage presence, letting the audience know that Ric was in fact single, in preparation of what was to come. The hype was not unfounded, Ric’s solo was flawless, evident even that Paul had some of the songs spirit in him. The bands songwriting ability and passion drove home with the audience, and made clear that this was a band to be reckoned with. Their structure was well developed, and satisfying weight was given to the each of the songs climax’s.

As the night came to a close, deciding who would win the battle of the bands would have been no easier than resisting the temptation bob your head to Nothing More. In the end however, I was excited to hear that Esimorp would be going into the studio to record their material sometime soon as winners of this years Battle Of The Bands!
– Ryan Harling

This attractive young Canto-pop outfit burst onto the stage exuding confidence –particularly impressive when you learn they’ve only been playing together for around six months.

Like a lot of young Hong Kong bands, they incorporate a lot of influences in their music – rock, pop and even some jazz/funk. There’s also a metal element which surfaces occasionally – band founders Hiro on guitar and Sai on bass started playing together in heavier outfits but modified their sound when they discovered finding talented singers in this genre in Hong Kong was difficult.

They eventually recruited talented front woman Zita whose charisma and excellent vocals adds an attractive element to the mix. And it’s a nice sound no doubt – the different genres meshing together well and providing plenty of dancey moments for their fans bouncing around at the front.

However, while “Walk” and “Soul Sweet” roll along pleasantly enough, you are kind of left waiting for everything to kick in and the set to really explode. This doesn’t truly happen until last song “Monochrome”, which is definitely heavier and more passionate. For LPM – especially bearing in mind Hiro and Sai’s metal roots – this feels like the band’s natural musical level, and means they avoid that pop/rock/jazz by numbers feel so prevalent here.
– Dan Creffield

Mockingbird opened their three-song set with Departure – an upbeat chuggernaut with a distinct emo rock vibe. Choruses came crashing in between Evanescence-esque guitar picked verses, although singer Miki was fighting against a barrage of heavy guitars, often straining to hit the higher notes, with the lyrics “Out of a broken dream” being difficult to pick out.

She was still fighting against the wall of sound during Lotus. This song again utilised clean picked verses, but the half time chorus led the band in more of a Paramore direction stylistically. The song gradually built in power, and really highlighted drummer Kelvin’s inventive style.

The 5-piece ended with showstopper Poison (Time To Say Goodbye), which saw the band at their most confident. Again, the picking guitars were more prevalent, although with a little more grit, which soon paved way to a soaring chorus. Miki was finally dominating the mix, and flaunted her vocal ability with flare and precision. It’s just a shame it took them a couple of songs to get into their stride…
– Chris Gillett

1. TRICK
2. AGAINST the Brazen
3. Midnight PARADISE

The driving AGAINST the Brazen allowed Lung to come out of her shell, demanding people’s attention with her foot on the monitor, and delivering a vocal with far more power than the opener. The track was constantly changing, without feeling forced, and the gothic synth sounds merely added to the personality of the well-rehearsed group.

Narcissus took everyone by surprise with their closer Midnight PARADISE. With constant bass arpeggio runs, the rest of the band adopted a descending jazz skiffle. Drummer Yuk Chung Ching even embellished a neat solo, before diving back into the frantic jazz meld. It was a risky move, but they completely owned it, before Lung sealed their set with a kiss to the crowd. A faultless performance.
– Chris Gillett

Over You Again began with a mellow piano and bass pairing while Maria Lopez sang shakily, probably due to nerves being the final band of the night. The song dramatically shifted into unified stabs, with bass player Clark Cahill slapping all the strings. From this point, Lopez sang more accurately and confidently while the song was essentially a straight-forward driving rock track, and could easily pass for Stereophonics.

Cahill became even more animated in This Place, running over to the other side of stage, writhing around and sticking out his tongue as if he had suddenly inhabited the spirit of Flea. The song had a subtle funk pop rock sound which quickly ramped up in tempo to more of a country rock feel. It was energetic, but came across like two random ideas stuck together just to create a complete song.

Wanchai Road closed their set, and the night, with Supremacy. Centred around a Lenny Kravitz-style guitar riff, the track channelled a downtempo 60s classic rock sound, with Frusciante-esque funk guitar chords in the verses. Sadly, the song was ruined by a sloppy keyboard solo by Diego Caro, which really jarred with the other members’ contributions, before the band instigated their trademark move of speeding up once more towards the end.

It’s great to see a band that has such a strong and loyal fan-base with them, but they should bear in mind this doesn’t compensate for memorable or cohesive songs.
– Chris Gillett 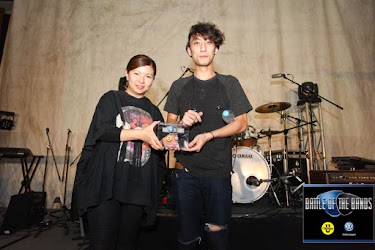 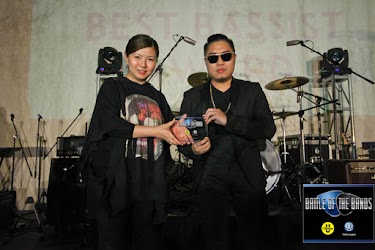 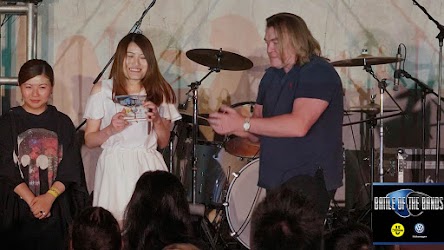 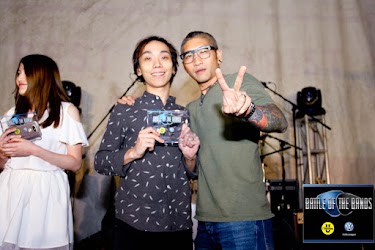 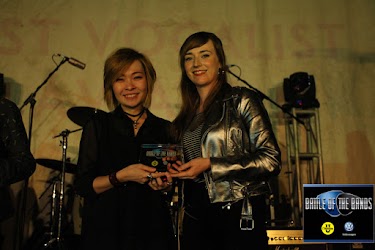 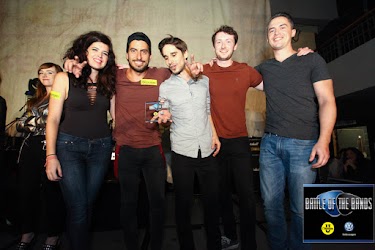 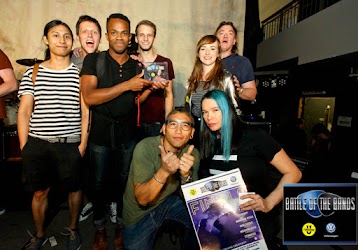 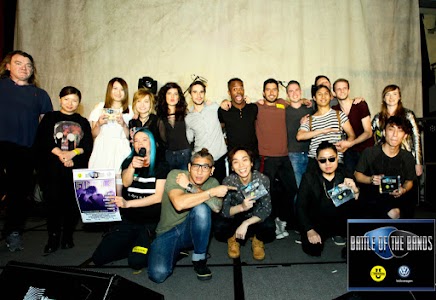 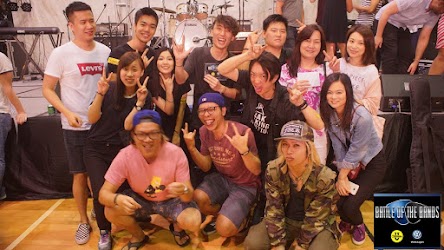