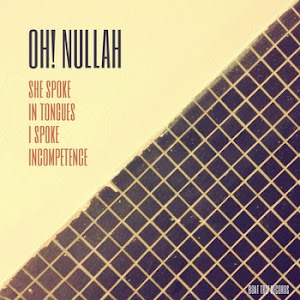 Oh! Nullah is a new project headed by Ben Tse of TheLoveSong. She Spoke In Tongues, I Spoke Incompetence is its first product, a conventional eight-song album made available by less conventional means: free download. Artwork, titles and syntax suggest Godspeed! You Black Emperor and I wonder if I’m in for some abstract post-rock.

Instead, the opening two tracks, “Everything Looked So Simple” and the title track, are tight, peppy, guitar-driven rock. Duelling left/right guitars, Dinosaur Jr-esque noodling, complex and creative drumming, and assertive if not aggressive vocals add up to a big sound which welds power to energy. Production is conspicuous and slightly blown out, which is kind of cool until you realize you may not make it through the record without picking up a headache – think OK Go’s Of The Blue Colour Of The Sky. We’re also introduced to Ben’s unique vocal style, which is strong but largely atonal and barking. The decision to frequently double up the vocal on this recording contributes to its muddiness – it’s a problem when lyrics are clearly important but can’t be clearly discerned.

The juxtaposition of this vocal approach against the chord progressions and subject matter can be somewhat dissonant, as in the otherwise intriguing closing track, “First Heard At Missing Link”, or plain jarring, as in “Jardine’s Lookout Taught Us” and “This Style Erodes”. The latter two tracks, appearing mid-album, are pulled back, slower tempo numbers. While they’re not quite in the band’s comfort zone in terms of composition, arrangement and restraint, these tracks are generally well-executed and provide a welcome break from hard-charging drums and guitars.

Perhaps the most natural school for this group is punk – both in terms of lyrical concerns and musical style – and they get to stretch their legs in the more sarcastically-toned “Chinese Flag Raises Void Of Surprises” and “Critical Analysis With A Grain Of Salt”. Chinese Flag is a Bad Religion-style foray where the voice has the right quality but its flatness in pitch dishes off the melody to the guitar. The effect is something like Zack de la Rocha fronting a punk band and singing an octave down. Critical Analysis is essentially an exhortation to have the courage to take control of your own life. It’s a contemporary take on personal concerns which adds another layer to the album’s social and civic themes.

The high point of the album may be the fifth track, “Long Walk Home From Arnos Grove”. A punchy, nicely accented riff and anthemic feel are aided by slighter crisper production on the vocals. The message is both positive, about human nature and resilience, and critical, of the struggles created by established wealth and entrenched privilege. Guitars and bass still have to do the heavy lifting when it comes to melody, but this one just about works and the slightly off-kilter ending is a nice touch.

If you’re looking for categories, Oh! Nullah is essentially punk prog rock. It’s interesting, complex and creative, but unclear and uncompromising vocals combined with a lack of variety in dynamic makes it a difficult task to judge the mood and message of individual songs. Very probably an acquired taste, but it could well be worth acquiring. And if the musicians on this record could reproduce it live, it would definitely be worth seeing.

Download She Spoke In Tongues, I Spoke Incompetence at: http://ohnullah.bandcamp.com