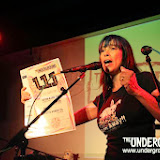 Our last Underground show in 2013 and we were honoured to have our event as part of the People’s Fringe Festival 2013 & the four acts that night were teeming with creativity & bursting with original song-writing. Big thanks to Backstage Live and their wonderful staff & soundman. Huge acknowledgements to the amazing Underground team. A round of applause to the audience who gave the bands their attention & love. See you all in 2014!
love Chris B xx

It’s not all that often that we have solo acts at the Underground, so the night was begun in a slightly unusual way by Kevin Kaho Tsui. The very perky young man, who is apparently relatively new to the whole music thing, betrayed no sign of this to us as he began his set. What I was expecting to be a simple, standard boilerplate set of the typical cutesy singer-songwriter acousticism, however, didn’t materialise – well not in its unadulterated form, in any case. There were certainly a lot of the mid-range crooning, saccharine tunes and lyrics that acoustic pop usually contains. However, he did try to attempt a Reggie Watts-like build-up of music by spot-recording and looping bits live. I must confess to being a fan of this approach – the way in which it allows songs to build up feeling and momentum by the simple act of simultaneous repetition is nothing short of marvellous.

Some particular attempts suffered from some hiccups (a mess-up and a false start to be exact) and his quite-visible nervousness did lead to a couple of flubs. However, these were not death knells, but minor setbacks, because the sweet, layered music created a lovely atmosphere, good enough to make one forget about the hitches. The strumming electric punches, the breathy beats the looped vocals and fingerpicked guitars combined to sound something like (an admittedly less alternative) Yo La Tengo, or even Daniel Johnston, particularly on This is the Moment. This came with some obvious Beatles overtones, as the bittersweet wistful Goodbye Bella (apparently the only song in the set with minor chords). There was some folky-country in the mix as well, which took things in a more Paul Simon-y direction (AFTER & Garfunkel), as on Sunburn. The only thing that really took the shine off the songs were the lyrics, which were a bit predictable and a tad hacky at points; however, I might be being unfair, since the point of the songs aren’t the lyrics, so this is a forgivable flaw. In all a very good way indeed to open the show, and I hope he continues with this mode of music in the future.
— Shashwati Kala

We went back to a more familiar setting with Token, with multiple guitars, heavy songs, and a drummer (gasp!). Their brand of poppy-metal-rock is, to be honest, not original; one has definitely heard this before. But, what they are is really good at executing this style of music, which I consider an acceptable trade-off (in which case I would take issue with them calling themselves ‘alt’). They’ve got some solid musicians, and one really excellent singer; to put things in perspective, she’s the only person I’ve ever seen who’s attempted an Evanescence cover and nailed it. Whether or not one likes Evanescence, that’s impressive. And unlike many heavy-ish bands who elicit my perennial frustration, they’re not a one-trick pony and sensibly vary the styles from song to song. 糾纏圈 was an evidently Evanescence-inspired song, with the high noodling and low shreddy guitars, and of course the customary violin… That’s right, they also use a violin in their music. It adds a nice layer of intrigue to what could have sounded like unacceptably hackneyed music, and listening to the violin play parts that would normally have been played as a wailing guitar solo felt fresh and actually interesting to listen to. 昨日論 was a bit of a disappointment after the first song, being quite Coldplay-like, and I found it too much of a jump in style to have been good, and I could’ve really done without the Avril Lavigne song, but the crowd there seemed to like it, so maybe it’s just me. 瞞徒 was a cleverly-written song, sounding like Metallica mixed with Coven, playing Ring of Fire (with a violin). It appears to be the band’s penchant to end their sets with a punch, and tonight was no different; 耳目手足was a pop-punky, boppy song, something in the vein of Blister in the Sun, that was, quite simply, really well-done. Which could be said of the whole set – it was just well-done, and they certainly knocked the show up a notch.
— Shashwati Kala

Unlike the previous band, I wasn’t really sure what to expect from Weisan by looking at them. And this turned out to be for good reason; there are certainly two opposing forces in their music. What is evidently the lesser one, is a very alternative rocky side and this is mostly the instruments; the straight-ahead rockiness was supplemented with some mild funkiness on the guitar to hit the higher notes, when combined with the piano sounds much like the smooth light-melancholy of 90s Fiona Apple. However, there’s also a much more Jewel-like side, with a folky breeziness to it, and these two styles mix well, giving the music a simple-yet-powerful appeal, and a vocal pleasantness that I can only compare to looking at a matte photo (if that makes any sense to anyone else), or to Debbie Harry, Either. Indeed, Down by the River had a texture similar to Turn! Turn! Turn!, which I think says it all. Possibly my favourite thing about the vocals is that I’ve finally found a female singer who just sings. No technical shortcuts, no affectation, just singing in a nice-sounding voice, which is heartening to hear.

One thing that the music is, is polished; it’s very polished. There’s a feel of calm professionalism about the composition and arrangements of the songs, which is a rare and very good quality for an indie band to display, which was on show in spades in Tear Me Down in particular. Thank You was a very Cat Power-like song, with a simple melody, dominant piano, and the obligatory slightly fuzzy feeling inside one’s chest. Repeat & Play was a great closer, sounding like a song by Indian composer RD Burman, which is even more unusual to her. The only one I thought was a bit off was the synth-poppy Fear, but it was entirely tolerable, so I can’t complain. Now that Weisan is based in HK, hopefully we get to hear a lot more of this band and listen to them progress, and they did an immaculate job of elevating the show’s energy even higher. They’re definitely worth checking out if they’re playing near you, so keep an eye out for them.
— Shashwati Kala

Velvette Vendetta advertised this appearance as a relaunch of sorts, and I quote: “replacing their previous vampiric ambience with upbeat synth hooks, atmospheric strings and piano pieces” resulting in something self-described as “synthesized heavy rock”. That being said, four dapper gentlemen took to the stage slinging traditional rock instruments, albeit with a keyboard lurking off to the side. Was the reinvention all that had been hoped for?

True engineers avow the virtues of elegant simplicity. Not for reasons of speed or affordability, but because the less moving parts, the less that can go wrong. That might ring true for Velvette Vendetta after a show that was fraught with teething problems which threatened to derail the set, sap band morale and convince the remaining audience members that midnight was bedtime after all. The first track kicked off with feisty palm-muted guitars, but before long there was amp trouble for one guitar, and meanwhile drums and bass struggled to connect with their pre-recorded backing track, each tentatively-struck note sucking energy out of the overall sound. This introduction was followed by a ten-minute interval in which band members and sound crew battled with the misbehaving amp, eventually switching it out for another. The lads put on a brave face and eventually got on with it, but the package continued to sound disjointed, intonation started to become a problem and leaden feet told a sad story.

A couple of tracks in, things began to pick up. The frontman created some interest by moving from guitar to keys and back again, and the back line began to play – and move – with noticeably more power and passion. However, operatic song structures – the band seemed to want to deploy all their tricks in every song, including regular changes of feel and tempo – made the high points difficult to sustain and difficult to place in the context of a song. Tracks seemed to blend in to each other and were only clearly distinguishable when synth sequences had to be reset. Having not seen the band before, it’s difficult to know just how much they’ve changed, but “vampiric” still seems apt to me. It’s more concise than “Muse meets Rocky Horror meets Van Helsing soundtrack”. If this sounds interesting, well, it could be, and I’m sure there’s a market for it somewhere out there. The band’s extensive touring history can’t have happened by accident.

Gigging ain’t easy, and some days just aren’t yours. Velvette Vendetta fought to the end, but summed up their bad day pretty well by finishing with their backs to the crowd and issuing nothing more than a cursory wave au revoir before exiting the stage. Better luck next time.
— Brendan Clift